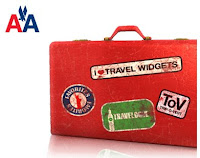 American Airlines announced today the release of a widget for Facebook in an effort to “understand how consumers interact with one another”.” The tool allows Facebook users to share trips within their network and comment about their experiences. American has always been a leader online going all the way back to the late 1990s when they introduced an early attempt at personalization with BroadVision (later replaced by ATG) on AA.com. I doubt the agenda is really to understand customers as AA has extensive research on customer behavior both at AA.com and through more traditional survey methods. It is more likely the widget’s purpose is to understand how AA can work within a social network to help influence future bookings. AA is also working with Microsoft on delivering ads in Facebook. As with any social network effort, sometimes the results are not what the vendor expects. For example, here is the first comment on the TravelBag Facebook page: “The design sucks. It should allow the end user to control what shows on his/her profile page. Get rid of the goofy suitcase. It eats up about an inch of screen space and adds absolutely nothing to the user experience [just add “American Airlines” into the box title].” And this comment “Disappointed as a loyal AAdvantage member that this can’t pull in my existing reservations from AA.com.” These comments point to the challenges of creating widgets for social networking and the need to integrate the widget with the existing reservation process. That being said, I applaud AA’s effort to find a place within the expanding role of social networking.