Is History Repeating Itself with Google Android?

Is History Repeating Itself with Google Android? 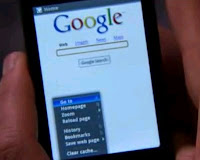 I am old enough to remember the early days of personal computing. In fact the first Mac I worked on did not have its own hard drive and thus required switching out floppies to do any simple computing task. My first non-Mac “personal” computer was a suitcase sized Compaq which ran DOS and Lotus 1-2-3. The advantage of the Mac GUI was obvious. When the first version of Windows was released it contained many Mac like functions and through later releases soon became the dominate GUI for PCs. Despite Apple’s initial innovation, Windows based-PCs are the standard.

I am starting to question whether history is repeating itself on mobile devices. There is no dispute that Apple’s iPhone represents a game changer in the world of mobile technology. With the first practical mobile Web browser, the iPhone delivers a vastly improved Internet mobile experience, though the telephone aspect of the device is still in need of enhancement. The Google mobile platform is in its infancy, but we should see Android based mobile phones by Q4 of this year. Google has announced an agreement with the Open Handset Alliance, a consortium of 34 handset manufacturers, carriers and chipmakers that have said they plan to support Android products and services. As an open-development platform, third party applications will flourish. Apple’s iPhone is clearly the innovator, but the market will likely be flooded with iPhone clones with 18-24 months. Will the Android platform do to the mobile phone what Microsoft Windows did to the PC market? The answer is not completely clear as the mobile industry has many operating systems – Symbian, Palm and of course Windows Mobile. There are also a variety of development environments including Java and Brew. In addition to an innovative design, Apple’s iPhone also shifted a significant part of the revenue from AT&T to Apple, something very much on the minds of all mobile carriers. This economic shift plus the power of Google to dominate the mobile market is something to watch as Google Android enabled phones appear later this year.