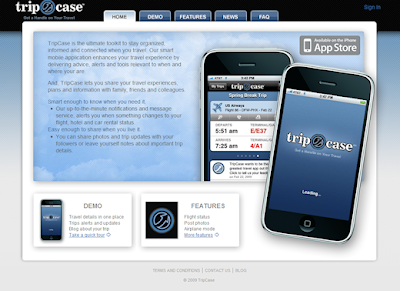 Sabre has introduced a downloadable iPhone app that competes with TripIt.
It has some similar features but unlike the email parsing capability of TripIt, TripCase automatically imports the PNR information provided it was booked in Sabre. It is currently only available on the iPhone, but additional platforms will be introduced later this year. So is this a TripIt killer? Maybe at some point, but certainly not immediately.
What I find fascinating is the fact that Sabre participated as one of the investors in TripIt’s 5.1 million in Series B financing. It looks like Sabre is hedging its bets!

What is a bit ironic is Sabre’s market behavior which reminds me a lot of Microsoft back in the 1990s. Back then, Sabre joined other tech companies in challenging Microsoft’s ability to control the development of applications because of its ownership of the OS and browser. In those days Microsoft had a solid reputation of partnering with smaller software entities and then coming out with a competitive product. It is unlikely that Sabre Studios who developed TripCase had any connection with the Sabre group that invested in TripIt, but the fact that TripCase is a clear TripIt competitor at least gives one the impression of a one time partner who is now a competitor.

From my perspective I am happy to see a major travel brand embracing the downloadable app store approach to distribution as these types of apps can take advantage of the location awareness of the smartphone delivering new services not available on the Web.