The Demise of Clear

Is the Finger Print Reader on the IPhone the Solution for M-commerce and Security?

The Demise of Clear 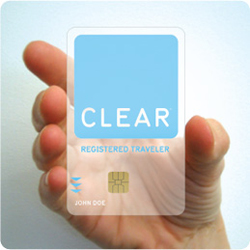 As a frequent traveler I am quite frustrated with the demise of Clear, the registered traveler program. I just signed up for Clear a few months ago and I only got to use it a few times. I believe the concept was good, but the execution was very inconsistent. For example, in San Francisco, the Clear lane merged into the normal security line rather than the FC priority line. So though you were a priority traveler, you had to wait while families and their strollers navigated through the security process. In addition, rather than being a self-service, the Clear personnel basically took my card and put it into the machine. I am sure this was designed to assist first time users, but definitely added to the cost of their service. The best experience I had with Clear was at Dulles Airport in Northern VA. In fact with all my work with the DTMO and GSA, I intentionally signed up for Clear knowing that it would be of value at Dulles. The Clear check-in line was downstairs and saved me at least 30 minutes fighting the mobs on the normal security lines. The way Clear simply shut down without notice will make me very reluctant to every sign up for a registered travel program again. In addition, as a Global Service member of UA, I am able to bypass the security line and allowed to cut into the FC line (though I always feel guilty when I do so!).
As mobile boarding passes become the norm over the next few years, the airport security process should set up dedicated lines for mobile boarding passes as the TSA staff at the various airports will need to be trained to accept the mobile bar code. Considering the fact the TSA process is not standardized across all US airports (for example some require you hold your boarding pass in your hand, others don’t and some look at boarding pass while others don’t), the implementation of the mobile bar code boarding pass is bound to have some problems.