Location Based Networking Apps and Travel 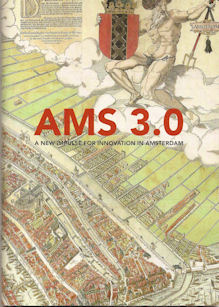 Last month I spoke at the World Congress on Information and Technology (WCIT) in Amsterdam.  Mark Ejlenberg one of the co-founders of the hotel online content distribution platform Leonardo, presented a new project called AMS 3.0.  The goal of AMS 3.0 is to create a platform that will make all the city’s data available. Mark has been working with a group of students from the Waag Society.  During the evening after the day’s session I had the opportunity to experience the student’s work first hand while on a canal cruise.  By installing a mobile app from 7Scenes or simply taking a picture of a QR tag  that the students placed along the canal with a mobile device , I was able to view the interior of a building we were cruising past.  This was a very exciting experiment that demonstrated how a traveler can better interact with the tourist sites using their smartphone.  AMS3.0 is one of the 70 global projects accepted by the WCIT for focus over the next two years with the results to be presented at WCIT in 2012.

On my session which was entitled “New experiences: Exploring the City & Innovating the Travel Industry” had a great mix of speakers.  In addition to my talk on mobile travel innovation and Mark’s review of AMS 3.0 the other speakers included Dov Winer,  Scientific Manager Judaica Europeana, Dick Groten, CTO Layer, and Ronald Lenz CEO of 7 scenes.  Dov’s presentation reviewed the current status of Europeana,  a EU sponsored effort to digitize content from museums, galleries, archives, libraries and audio-visual collections.  The effort is putting a semantic layer over this digitized content to allow applications to access the information.

I have observed for many years that  in Europe there is a gap between governmental/academic tourism projects and the commercial sector.  I encourage all interested parties to check out both the AMS 3.0 initiative as well as the overall Europeana  effort to investigate online and mobile applications can tap into this rich semantic content.