Video on Social Media, Social Networking and the Social Web 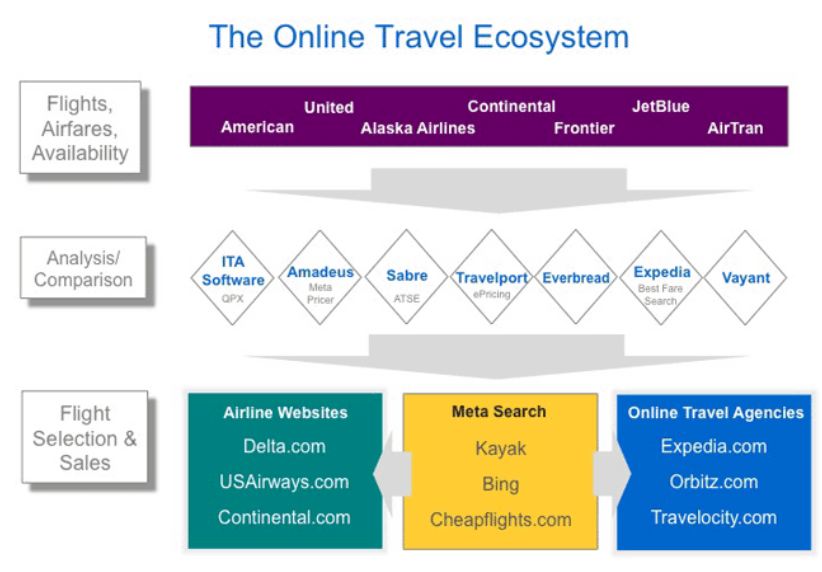 Now that the Google acquisition has been announced a great deal speculation has emerged as far as Google’s intentions. Given the fact that regulatory approval is required and that the deal has not been completed, ITA itself has been unable to speculate on Google’s strategy. Google has devoted some energy in stating that it will not become a seller of travel, but hasn’t disclosed specifics on their plans other than stating that it will improve the consumer shopping experience.

This chart which Google introduced regarding the acquisition has some interesting implications. Certainly a main goal of this diagram is to show the world (and the DOJ) that there is competition out there for Analysis/Comparison as part of the ecosystem.  I believe there is more to this diagram than simple positioning.

2) Analysis / Comparison – Back in the early 2000s, ITA  helped accelerate the urgency for the GDS to update their fare quoting software. Whether it was the Worldspan/Expedia Best Fare Search engine or re-written applications from Sabre or Amadeus, ITA forced the GDS to move this function off the mainframe and re-write it so it produced a greater number of choices. The chart shows that the GDS do have an opportunity to replace ITA as the fare quoting engine for airlines or meta-search players, but this is provided that they still have access to total information.  The current push by the Axis group to dictate to that the industry use the Farelogix XML schema has not yet been embraced by the GDS. The GDS are certainly capable of handling XML feeds, but the shifting from a total published environment to one where the airlines passenger reservation system control price and ancillary services could greatly weaken the control the GDS have on distribution. No wonder the audience during our recent PhoCusWright panel discussion wondered why we left the GDS off the list of potential players at risk due to the Google ITA acquisition. This issue may actually play well with the DOJ as the GDS currently have an strong oligopoly on travel distribution and new competition would help improve products for the whole industry.

3) Flight Selection and Sales – The interesting part of this chart is that Google did not list ITA as a direct competitor to the Meta Search players though most of the press and pundits believe this is where they will compete.

One way to look at this chart is that inventory could be delivered through a variety of paths. Airline to 3rd party such as Google/ITA or Vayant and then directly to the airline, for example. With all the current airline/GDS tension, the idea of true GDS bypass may emerge if the acquisition is approved. Don’t get me wrong,  I often believe the industry’s rhetoric that the GDS are dinosaurs and will fade into history, is similar to the famous Mark Twain quote” “The reports of my death have been greatly exaggerated.”.  I believe the GDS are strong players within the travel distribution landscape and will remain so for many years to come.  A Google ITA Cloud alternative combined with the airlines push for more control may mean that new competition is on the horizon for the GDS.