The Splinternet and Travel Distribution 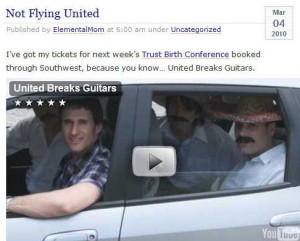 My wife’s Facebook friend recently posted this message declaring that she does not fly UA because they break guitars.  I recently spoke at the EzRez Thought Leadership Conference and I mentioned the now famous YouTube video which has received over 8 million viewings.  A question from the audience was simply whether people would change their flying preferences because of this type of video.  As evidenced by this blog entry, it has changed some people’s attitudes.
Social media has been so hyped it is easy to forget that it is in some ways an extension of the most effective type of advertising, word-of-mouth but on steroids.
In a recent article, Travel Weekly columnist Richard Turen stated that United now uses Dave Carroll’s video as a training device.  Another recent story mentioned that David’s bag was lost on a recent UA trip.  (I guess he returned to United after all).  So though the songwriter seemed to have forgiven UA,  his video legacy lives on and continues to influence the blogosphere.  Of course David’s next song may be,  “United lost my bag” considering his most recent experience.

Where in the World is Norm Rose?