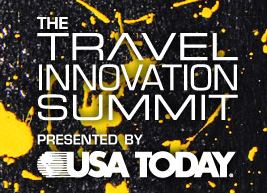 It was my pleasure again this year to be co-chair of the PhoCusWright Travel Innovation Summit 2010. The event brought together 33 companies in a fast paced series of 9 minute presentations/demos of innovative travel software. TIS is the brainchild of Bob Offutt (my co-chair) and Philip Wolf, CEO of PhoCusWright. TIS was modeled after the annual Demo Conference where start-ups take the stage for fast pitches to potential investors. TIS does not limit participants to start-ups expanding the field to include established companies.

Rather than comment on individual presenters, (for comprehensive reviews please see USA Today) I thought I provide you some behind the scenes perspective on the event. Our work began in early 2010 when Bob and I began interviewing applicants.  By the week before the show we had completed 60 interviews. Though some applicants presented innovative business strategies, those that were rejected generally lacked true travel technology innovation. Those that attended the event know that ever aspect of a PhoCusWright show is timed down to the precise second. To insure a smooth session, each of the 33 presented received a briefing on logistics and advise on content.  Bob and I then reviewed the majority of presentations online  in the two-three week period before the event providing suggestions on how to improve each presentation.On Monday morning we met with a few of the presenters for some additional coaching and Monday afternoon each presenter went up on stage to iron out any last minute technical glitches On the day of the conference, Bob and I alternated between announcing the presenter and moderating the 2 minute Q & A session after each presenter.To manage audience questions we used an iPad which showed the Ask PhoCus feed managed and edited by two of our analysts. Unfortunately, due to some Wi-Fi connection problems and the short nature of each Q & A period, the majority of our questions were improvised based the TIS presentations.I cannot disclose specific scores, but the four finalists – SilverRail , Kony, and Hipmunk all received the highest audience votes in their category with Goby the wild card with the next highest score. Clearly the sophisticated audience appreciated the innovation each of these presenters with the WOW factor of their presentation  being equally important. On Wednesday morning,  Bob, Kimberly, Philip and I assembled in the hallway behind the exhibit hall and Philip strapped on a harness and boarded the lift.  Once in the exhibit hall lift was raised to ceiling height. Kimberly placed the envelopes in the basket and Philip announced 3 runners up and 4 finalists. Bob, Kimberly, Angela (a PhoCusWright intern from NYU) then met with the finalists followed shortly by briefing for the 12 judges. The last finalist presented their 5 minutes of fame at 1:25PM.  The TIS team then picked up the judges ballots and tallied the results finishing 2 minutes before the official announcement by Philip on Center Stage.  There we some minor glitches along the way, but overall the entire TIS event went smoothly and I congratulate all the participants, the three runners up- CruiseLabs, GroundLink, and TrustYou and our four finalists and of course the show winner, SilverRail Technologies. 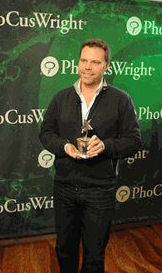