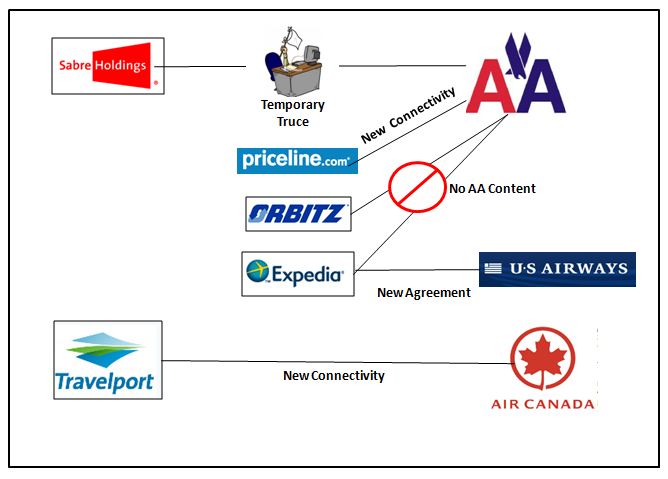 Since my December post, a number of developments have occurred on the evolving travel distribution front:

What does this all mean to travel distribution in 2011?  To many these may seem like conflicting developments with certain distributors sidling with the airlines while others clearly opposing their efforts to reshape traditional distribution.  In reality the recent announcements actually signal a certain level of detente. The GDS are bending on their hard stance about accessing ancillary fees via the Open Axis XML connection while with the exception of AA, other mainline airlines are showing a willingness to work with both the GDS and OTAs.

It seems somewhat ironic for one Travelport executive Kurt Ekert, to negatively describe the AA direct connect strategy in this way” simply an attempt by AA to push a materially inferior version of the value provided to travel agencies, suppliers and others in the travel distribution chain by the highly evolved and efficient GDS channel,”, while at the same time Travis Christ also of Travelport calls the Air Canada deal “an industry-leading end-to-end solution, capable of merchandising Air Canada’s content along with the aggregation of the GDS content”.  This seems illogical as both the AA and Air Canada solutions are based on the Farelogix (Open Axis Group) XML schema.

Many might wonder why Priceline has embraced the new connectivity, but Expedia and Orbitz have not.  Part of the issue may be how the air booking engine was built. I have  no first hand knowledge of how Expedia created its booking engine, but it is possible that the booking tool was programmed directly against the GDS API.  Other booking alternatives use a neutral  platforms such as the Pass Consulting multi-source platform that creates a layer between the GDS and the booking tool. It is therefore likely that Priceline architecture is more multi-source which has allowed it to easily integrate the new AA XML schema.

One of the recurring themes of the anti-AA direct connect group is around the lack of  ability for consumers to accurately compare airfares. This argument is weak at best.  Fragmentation already exists in online travel where Low Cost Carriers such as Southwest Airlines refuse to participate in OTAs. Meta-search engines such as Kayak can provide the consumer a cross Web comparison shopping experience. In the age of the Web, comparative shopping happens at the point of sale.  That being said the GDS continue to control specific segments of the travel industry, especially corporate managed travel. This may change if Open Axis Group member Rearden Commerce or Concur another leading provider of online corporate booking tools where to embrace the AA direct connection.

No doubt that 2011 will continue to see confusing announcements and arguments from all camps, but at the end of the day detente will likely be reached whereby as in the USAir/Expedia or the Travelport/Air Canada agreements, ancillary fees are obtained through the Open Axis Group XML schema, powered by Farelogix.